M&A activity in North America continues at a robust pace this year with $849 billion of closed transactions for 4,754 deals in the first half of 2019. The post-recession trend of strategic and private equity sponsored activity continues at a strong pace for large and small deals alike, as shown in the chart below. If currently announced deals close this year, M&A activity will again cross the $2 trillion threshold in 2019 for the fifth consecutive year. While total dollar volume is skewed by a number of mega mergers, such as United Technologies $90 billion acquisition of Raytheon, the median size of all transactions over the past 5 years is less than $100 million, an important consideration for middle market companies as they assess M&A market conditions for their business. 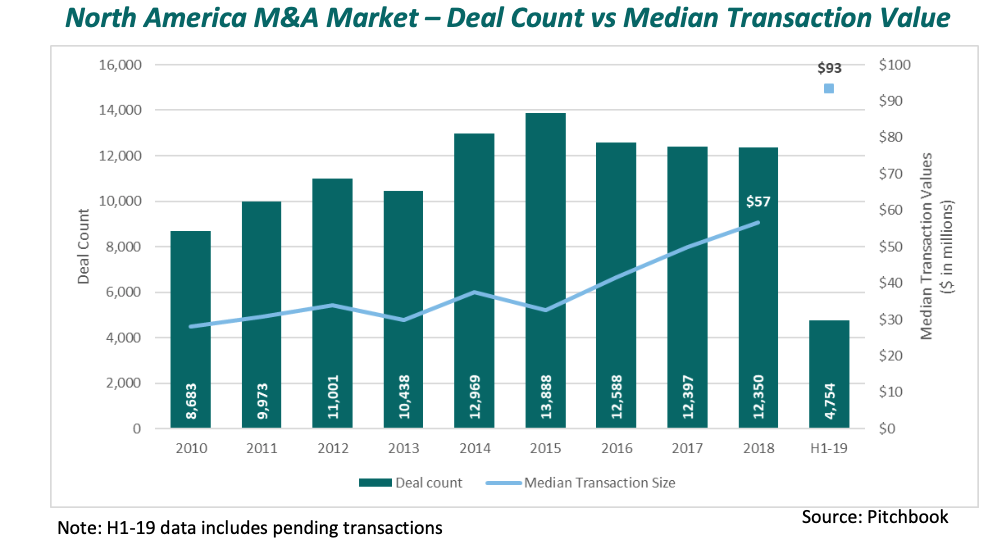 A number of recent indications suggest a mixed view that overall U.S economic growth may be slowing, yet a number of positive conditions remain:

Against this backdrop, it is worth noting that the S&P Index is up 16% year to date, its best performance since 1997, but arguably buoyed by a continuation of the low interest rate environment. M&A multiples continue to remain high and, in some sectors, have risen over the past year, as shown in the chart below for the overall market and certain select industry sectors addressed by CF.

With access to low cost capital, corporates continue to aggressively pursue strategic external growth opportunities to strengthen their existing business, compete more effectively and profitability in the markets they serve, and better position themselves for the next economic downturn. Importantly, private equity continues to be a reliable and consistent acquirer of businesses across all sectors, and underpins the high strategic valuations being paid by corporates.

Historically, private equity has represented over 30% of the M&A market, measured by number of deals, but has grown to nearly 40% of all transactions thus far in 2019, as shown below. Uncommitted private equity funds stand at record levels, estimated to be over $2 trillion with over $700 billion raised in 2018 alone.

Corporate Fuel regularly performs in-depth evaluations for its corporate clients who are assessing whether now is an appropriate time to sell a business. Our reviews encompass an analysis of industry-specific market conditions, most likely potential acquirers, comprehensive assessment of key selling points and potential strategic and cost benefits for potential acquirers, the valuation range likely to be achieved and overall likelihood of success. Given somewhat mixed economic signals and market volatility, this type of initial assessment before any decision is made by a Board or business leader to sell their business may be more appropriate than ever to determine the probability of meeting objectives. As a result of this careful pre-transaction assessment, Corporate Fuel has a highly successful track record in selling businesses for its clients with favorable outcomes.

Our quarterly industry update includes an overview of the latest M&A activity and valuation trends in Food & Ingredients. This issue also includes other recent newsworthy topics: inflation and plant-based foods.

We know from our work advising sellers and buyers of businesses in the food industry that there are certain characteristics that all buyers look for in an attractive acquisition target. Evaluating a brand’s strengths and weaknesses through the lens of a potential investor can help a business leader create a business that ultimately earns a premium valuation. We have found that focus, brand image, margins, growth, differentiated presentation and management are the factors that really drive valuation.